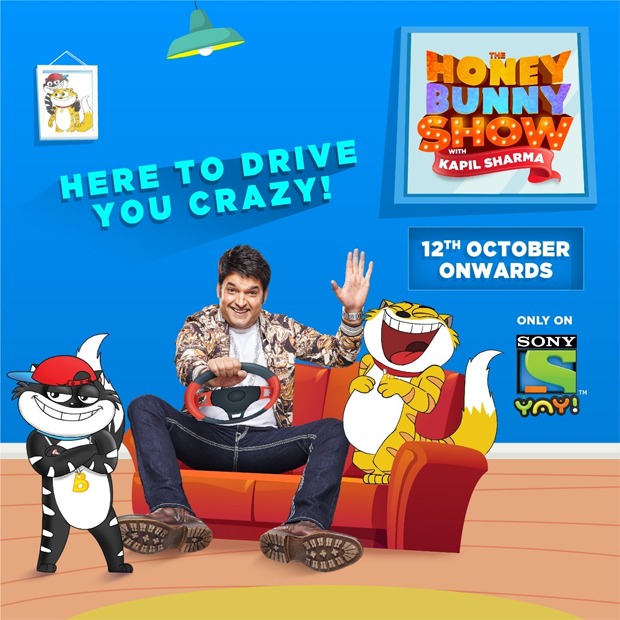 They are goofy, gullible, yet so lovable. Yes! we are talking about the popular feline duo, Honey and Bunny, who enjoy an ever-increasing fandom amongst kids in the entire country. While they continue to make kids laugh through their own escapades, the cat duo is all set to welcome a new member to their gang – the comedy king Kapil Sharma.

This is the first time that kids will be in for a treat as they get to see Kapil Sharma explore the world of Honey Bunny. With Honey-Bunny ruling the hearts of the kids and Kapil Sharma being ever-so-popular amongst the masses, Sony YAY! pairs them together to provide fans an unmatched experience of impeccable comic timing and hilarious camaraderie. The trio comes together in a rib-tickling series in the newly-launched offering ‘The Honey Bunny Show with Kapil Sharma’ starting 12th October on Sony YAY!

The series of episodes will present a newly found friendship as Kapil showcases a never-before-seen avatar of him as he joins Honey-Bunny in their mischief-filled shenanigans. The young fans will not only get to see the camaraderie between the trio but will also witness the classic leg-pulling between the three resulting in many “LOL” moments. It promises to be a carnival of comedy on the show as the popular TV show host will add to the Jholmaal on display with his wisecracks and humour. With an innate ability to make viewers roll with laughter, Kapil, in his comic avatars will be the star addition to the adventures of the popular YAY! toons. This marks a new chapter in the journey of Honey Bunny who are all set to surprise their fans by welcoming Kapil into their Jholmaal gang.

Kapil Sharma says, “When it comes to making kids laugh, the comedy on display that the show offers appeals to my style of humour immensely. Through this association, I look forward to reaching out to my young fans, who are so very special to me. I am very excited for this absolute dangal of comedy with Honey and Bunny and together hope to win everybody’s hearts. I hope the audiences have as much fun watching the show as much as we had making it!”

Along with this exciting collaboration, Honey-Bunny shall also feature 6 brand new movies and exciting fresh episodes. As the kids’ favourite toons Honey and Bunny gear up to wrestle with the comedy king of Indian television, do not miss out on all the fun and mischief as one can catch all the episodes of “The Honey-Bunny Show with Kapil Sharma” from 12th Oct onwards.