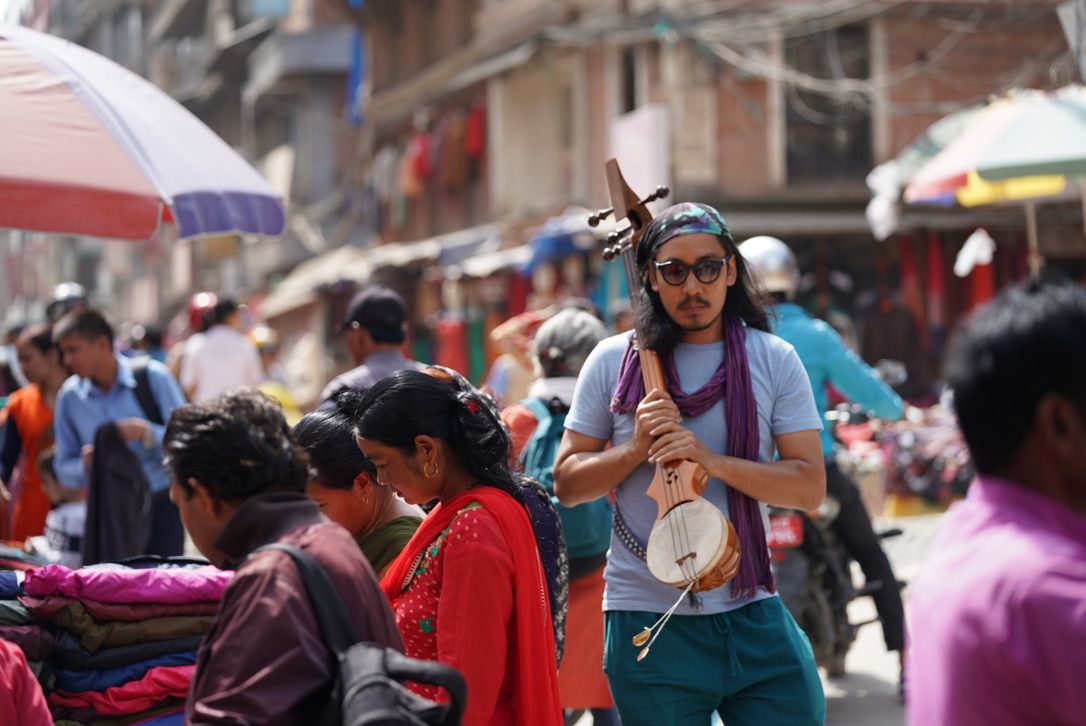 A Kathmandu man was told he has been cursed and will die within a week which makes him desperately seek an elusive spirit that might save him in “Looking for a Lady with Fangs and a Moustache.” Playing upon Tibetan Buddhist tales, this latest movie from Bhutan-born writer-director Khyentse Norbu stars ponytailed Tenzin (Tsering Tashi Gyalthang) who has ambitious plans to open “the best coffee shop in all of Nepal.” To that end, he’s raised capital from various sources, including the mother who encouraged him towards music studies he is not really suited for. Looking for potential locations to open up the said coffee shop, he stumbles upon an old temple abandoned due to an earthquake, this temple was known to be the womb of the goddess and should not be disturbed which Tenzin doesn’t take seriously.

Later he wishes he hadn’t disturbed this tomb as he started seeing strange visions, spying a young girl singing in the street, then a young woman cleaning his kitchen in the middle of the night. Jachung, a Tibetan exile, pushes him to meet with a hipster monk who infuriatingly informs Tenzin he’s doomed due to his offense. This too gets laughed off, until our protagonist is pushed to visit an elderly Buddhist master. The grumpy master advises that his sole hope is to find and win the allegiance of a female spirit associated with transformation and wisdom. But as she might take any form, that search becomes something of a wild goose chase.

“Looking for a Lady” conveys that same state throughout, blurring the everyday and fantastical. This film stays with you and you find yourself thinking of it and specific scenes weeks later. That is the artistry of Looking For A Lady With Fangs and A Moustache. The director wanted audiences to experience different types of cinema and especially ‘appreciate stories that are outside of the stereotypes which we tend to expect from dramatic films’. He most definitely achieved that with this film.

Looking for A Lady with Fangs and A Moustache is a film that leaves the audience with an experience of its own. It has the ambience, and the the locations will mesmerize you and performances by the actors will tell you the story. From the myriad characters especially Tenzin and his life in the film, the choices of the silence, the shots of the beauty of Nepal, the maze of life in Kathmandu juxtaposed to the traditions, beliefs and spiritual practices that are still alive today – we are transported there into the movie in the many moments, we are not just watching the story play out. That is what makes the film so interesting and so good.

Norbu the director himself is a lama who as a child was pronounced the third incarnation of the founder of Tibetan Buddhism’s Khyentse lineage. In this movie the religious teachings are seldom spelled out, but subtly explained to the viewer in an anecdotal progress of ingratiating, whimsical appeal.

Watch the trailer of the movie below: