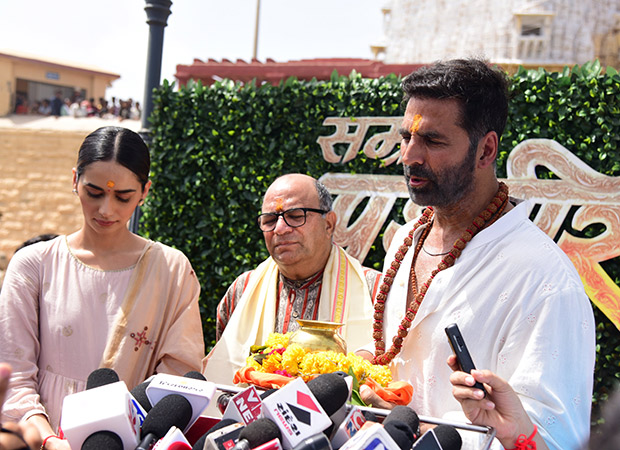 Home Entertainment Akshay Kumar and the team of Samrat Prithviraj distribute 20 litres of...

Akshay Kumar, Manushi Chhillar, and filmmaker Dr. Chandraprakash Dwivedi paid their respects at the historic Somnath temple today as a sign of salute to Samrat Prithviraj Chauhan’s spirit, bravery, and sacrifice to protect India’s freedom. Carrying Samrat Prithviraj Chauhan’s flag, they honoured the brave warrior who happens to be the last Hindu Samrat of India. Akshay Kumar and the team performed puja at Somnath.

Dr. Chandraprakash Dwivedi said, “It was a really touching moment to perform the puja at Somnath temple today. We kept Samrat Prithviraj’s flag during this puja and also offered all the necessary things that all Hindu Pujas have during this process. It was incredible to witness the puja with our eyes and we also offered milk on the Somnath Jyotirlinga. We only took a very small amount of milk necessary for the offering and distributed about 20 litres of milk as bhog to the underprivileged post our Puja. This is an experience of lifetime for us.”

Samrat Prithviraj, is based on the glorious life of the brave king Prithviraj Chauhan and features Akshay Kumar in the titular role. He plays the legendary warrior who fought valiantly to protect India from the merciless invader Muhammad of Ghor in this visual spectacle. As a part of a run-up to the film’s release, director Dr. Chandraprakash Dwivedi is honouring his life and self-less contribution by carrying his flag to historic spots of India.