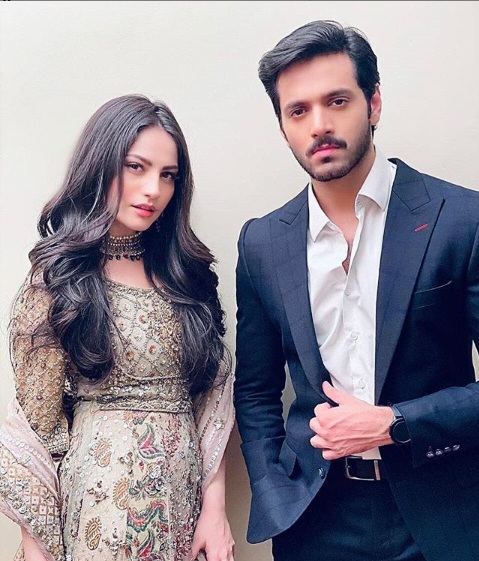 After winning our hearts with a brilliant performance in Ehd e Wafa, Wahaj Ali is ready
to light up our screens once again in the soon to be aired drama, ‘Bikhray Moti’ opposite the gorgeous Neelum Munir.

Produced under the banner of Next Level Entertainment and directed by Shahid Shafaat, who has directed blockbuster projects like Dil Mom Ka Diya & Surkh Chandni. The cast of the serial also includes Yasir Nawaz, Nausheen Shah, Saleem Mairaj & Waseem Abbas in pivotal roles.

“Bikhray Moti is a very different project from Ehd e Wafa, and that’s is what excited me to sign up for it,” stated Wahaj Ali. “Additionally it was an honor to get a chance to work with the Samina Humayun Saeed, Sana Shahnawaz & Shahid Shafaat dream team.”
Wahaj Ali has been making waves with his performances and has starred in three back to back brilliant dramas in 2019, including; Haiwan and Ehd-e-Wafa. He has proved his mettle as an actor with his acting prowess and effervescent charm. With his range and potential to play diverse roles, the anticipations are high from ‘Bikhray Moti’.

The serial is expected to go on ARY Digital after Eid ul Fitr with the first look released by the channel last night:

Alia Bhatt starrer Gangubai Kathiawadi to get an official release in Telugu; teaser to release with Pawan Kalyan’s Vakeel Saab in theatres

Govinda tests negative for COVID-19; announces with a fun video