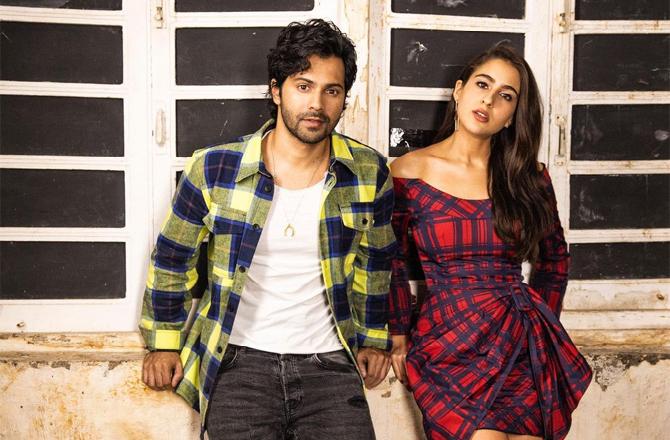 Varun Dhawan and Sara Ali Khan are gearing up for the first time for David Dhawan’s Coolie No. 1, the remake of Dhawan’s own hit from 1995, which also starred Karisma Kapoor, Kader Khan, Sadashiv Amrapurkar, and Shakti Kapoor.

The new film has a new ensemble of Paresh Rawal, Rajpal Yadav, Jaaved Jaaferi, Johny Lever, and Shikha Talsania. The lead pair has kick-started the promotional activities and an Instagram post was inevitable. Sara Ali Khan took to her Instagram account and shared a very cool picture with Dhawan but also called him a copy cat and a brat.

This is what she had to say about him in her post- “Varun Dhawan is a brat.  Shayari chor, copy cat. Don’t worry I have more tricks in my hat. I’m the OG poetess- you forgot that!” [SIC]

Varun Dhawan seems to be busy with multiple films currently. After the release of Coolie No. 1, which was originally planned for a theatrical release on May 1, he also has films like Bhediya with Kriti Sanon, a film with Kiara Advani, Anil Kapoor, Neetu Kapoor, a film on the life of Arun Khetarpal lined-up. Khan has Atrangi Re with Akshay Kumar and Dhanush that’s slated to release next year on the occasion of Valentine’s Day.

After Sara Ali Khan was questioned by the Narcotics Control Bureau about the drug nexus in Bollywood, she had kept herself away from Instagram. Now, over a month later, she is back on the social networking platform.