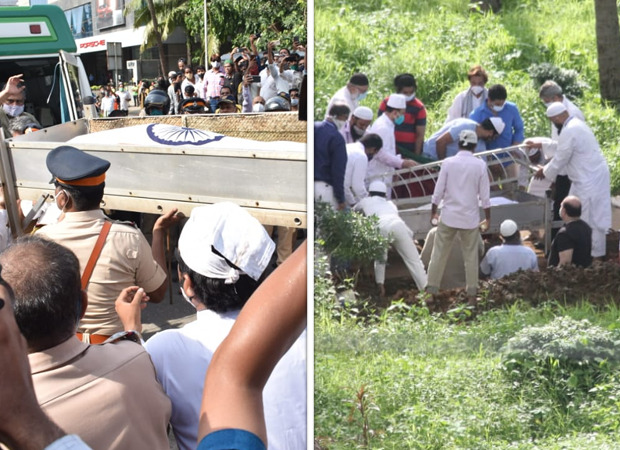 Legendary actor Dilip Kumar who passed away early today morning has been laid to rest with full state honours at Juhu Qabrastan. He was buried at around 4.30 pm on July 7. Fans of the legend were gathered around the hospital after the news of his demise was announced. Later fans were gathered around his Bandra residence and then several were seen near the burial ground to bid adieu to the star.

Dilip Kumar, a recipient of the Padma Bhushan and Padma Vibhushan award was laid to rest with complete state honours. His mortal remains were wrapped in Indian tricolour.

Several members of the film industry had arrived hours after Dilip Kumar’s mortal remains were brought to his Bandra residence. Among the first to reach the residence were Shabana Azmi, Vidya Balan, and husband Siddharth Roy Kapur, and Dharmendra who was seen sobbing. Maharashtra Chief Minister Uddhav Thackeray was also seen at the late actor’s residence to pay his last respect. Actors Amitabh Bachchan and Abhishek Bachchan were also seen at the funeral.