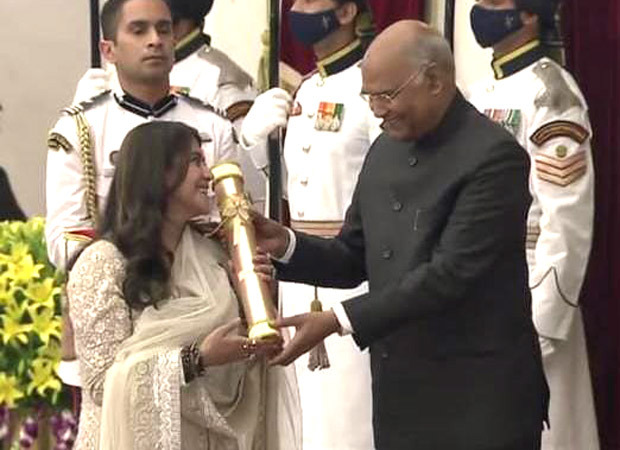 Producer Ekta Kapoor has been honoured with the prestigious Fourth Highest Civilian Award ‘Padma Shri Award’ for excellence in the field of performing Arts, on November 8 at Rashtrapati Bhawan, New Delhi. Kapoor was felicitated for her brilliant contribution in the field of television, films, and digital content. Ekta was accompanied by her father Jeetendra for the prestigious ceremony.

Sharing her emotions on this big achievement, Ekta exclaims, “It is an absolute honour to receive the Fourth Highest Civilian Award for my humble contribution in the field of performing arts. It is a surreal moment and a matter of great pride. I want to dedicate this badge of honour to my two pillars of strength – my mom and dad. They believed in me with their whole heart and it is because of them, I am who I am!”

Ekta added further, “I am really overwhelmed with all the love and accolades that are coming my way. I want to thank my family, friends, my team at Balaji Telefilms and most importantly – the audience, for believing in me and supporting me. I hope to always push the envelope, challenge norms, give talents a platform that they truly deserve, instill pride, and give back to the country that has fuelled my ambition and dreams.”

Kapoor’s fans and audiences have loved her growth as a nuanced producer and right from the get-go she has been spectacular. Having tons of stuff coming up between 2021 and 2022 featuring big names in her upcoming projects including Amitabh Bachchan, Kareena Kapoor Khan, Kartik Aaryan, John Abraham, Arjun Kapoor, Disha Patani, Tara Sutaria amongst many others, to now bagging this remarkable achievement, Ekta has indeed added another feather in her cap.