Twinkle Khanna and Akshay Kumar are one of the most loved couples of Bollywood. The duo is often seen pulling each other’s legs and indulging in some fun banter on social media. On Thursday evening, Twinkle dropped a cool picture of her husband and addressed him as her ‘maal’.

Twinkle took to her Instagram story and posted a picture of Akshay from their recent Maldivan vacay. In the picture, the actor is seen sporting a blue shirt with a pair of white shorts. He is seen showing off his salt and pepper look. 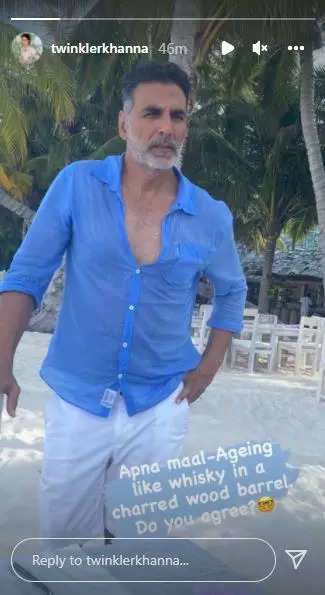 Recently, the duo celebrated their 21 years of marriage. Both of them took to social media and shared beautiful posts for each other. Akshay shared a picture with her from London and wrote, “Twenty one years since we’ve been married and yet it feels like I’m just getting to know her. Thank you for making each day feel like the first ♥️ Happy Anniversary Tina 😘 #21YearsOfAdventure.” While Twinkle wrote, “On our 21st anniversary, we have a chat. Me: You know, we are so different that if we met at a party today, I don’t know if I would even talk to you. Him: I would definitely talk to you. Me: Why am I not surprised. So like what? You would ask me out? Him: No, I would say, ‘Bhabhi ji, how is Bhai Sahab, kids fine? Ok Namaste.’ #21yearsoflaughter.”