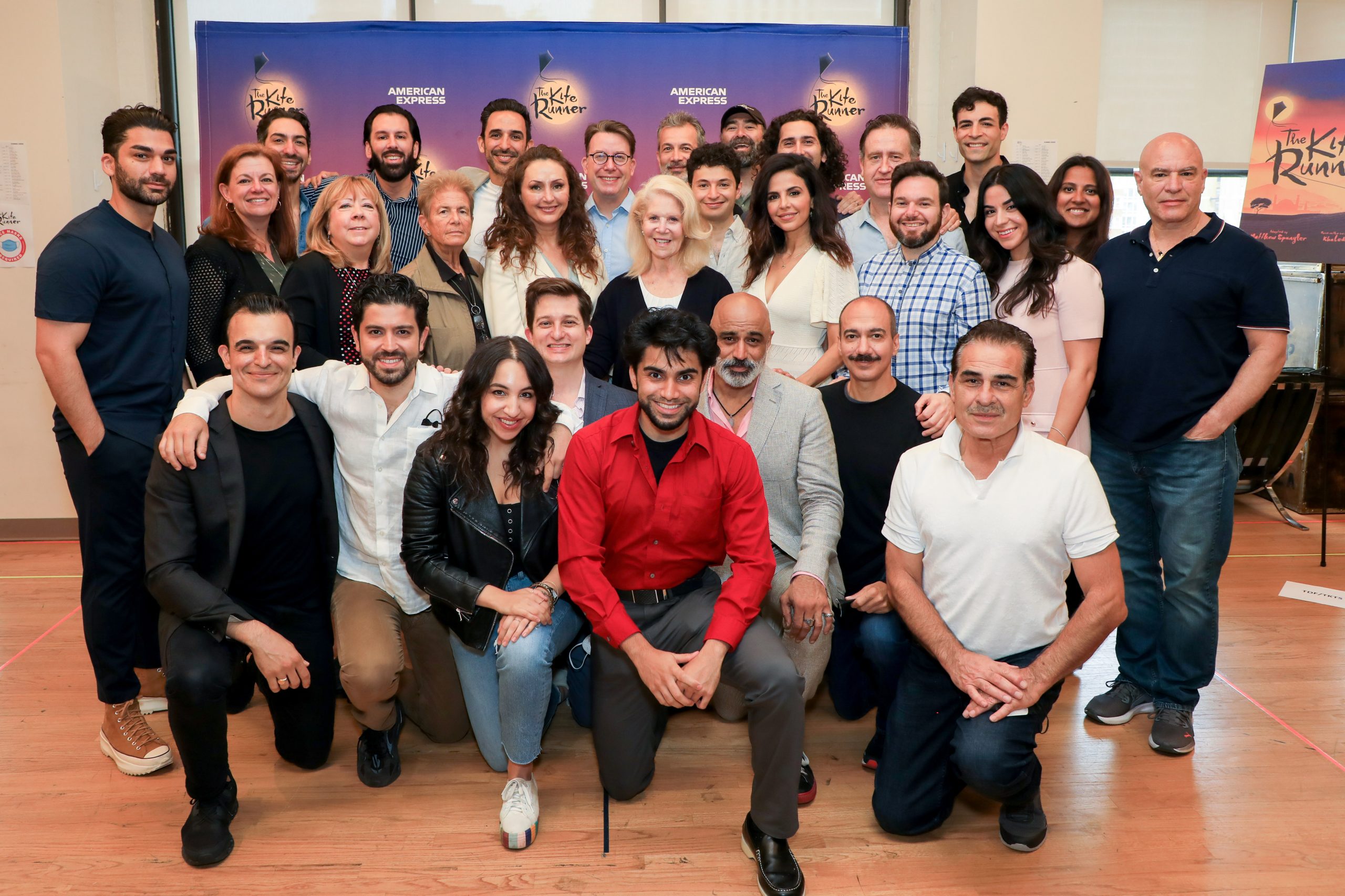 The producers of Broadway’s The Kite Runner are thrilled to announce the cast and creative team for its Broadway-bound limited engagement at The Hayes Theater (240 West 44th Street) this summer.

Based on Khaled Hosseini’s internationally best-selling novel and adapted by Matthew Spangler, the production comes to New York from two successful seasons in London’s West End where it was called “a cultural phenomenon” by The Sunday Express and “an enthralling tale beautifully told” by The Daily Telegraph.

Performances will begin on July 6; opening night is July 21, and it will run through October 30.

It is produced by Victoria Lang,  Ryan Bogner and Tracey McFarland of Broadway & Beyond Theatricals, Jayne Baron Sherman, and in association with UK Productions Ltd. and Flying Entertainment Ltd/Kilimanjaro Group Ltd. Daryl Roth is the Executive Producer.

Originally published in 2003, The Kite Runner became a bestseller across the globe and has since been published in 70 countries, selling 31.5 million copies in 60 languages. Now this powerful story has been adapted into a stunning stage production.

One of the best-loved and most highly acclaimed novels of our time, The Kite Runner is a haunting tale of friendship spanning cultures and continents, that follows one man’s journey to confront his past and find redemption. Afghanistan is a divided country on the verge of war and two childhood friends are about to be torn apart. It’s a beautiful afternoon in Kabul and the skies are full of the excitement and joy of a kite flying tournament. But neither of the boys can foresee the terrible incident which will shatter their lives forever.

The Kite Runner was originally produced by Nottingham Playhouse and Liverpool Everyman and Playhouse.

Faran Tahir (Baba). An actor, writer, director, producer, Tahir has appeared in over 50 stage productions across the US and the world. Recently, he played the title roles of Othelloat Shakespeare Theatre Co. and Richard III at Commonwealth Shakespeare Co. (Nominations). His film credits include over 30 films, e.g., Iron Man, Star Trek, Elysium, Escape Plan. His 100s of television credits include recurring roles on “Scandal,” “12 Monkeys,” “Warehouse 13,” “Once A Upon Time,” “American Crime,” “Dallas” among many others.

Haris Pervaiz (u/s General) A native New Yorker, Haris is thrilled to be making his Broadway Debut. Most recently guest starring in ABC’s NCIS: New Orleans. To my loving and supporting family, we did it! Thank you Laura Stanczyk for this opportunity and a big shout out to my reps: DGRW & CLA.

Eric Sirakian (Hassan/Sohrab) is thrilled to be making his Broadway debut in The Kite Runner! Theater credits include The Jungle (West End), Twelfth Night, The Comedy of Errors, and Pericles (Shakespeare’s Globe). Television includes “Masters of the Air” (Apple TV+), and film includes Havoc (Netflix), both upcoming. He studied at Yale and trained at the Royal Academy of Dramatic Art.

Houshang Touzie (General Taheri) started at the Tehran Drama Workshop, an avant-garde theatre institute. His career there led him to the Shiraz Persepolis Festival, where he worked with Robert Wilson, and later to NYC with the La Mama theatre group, where he appeared in The Tibetan Book of the Dead. In Los Angeles he established Workshop 79, a theatre company where he wrote and directed 16 plays in Farsi, touring globally.

Khaled Hosseini (Original Book Author) was born in Kabul, Afghanistan, in 1965. In 1980, after the Soviet invasion of his birthplace, Khaled and his family were granted political asylum in the U.S. Khaled studied medicine and practiced as a physician in California until 2004, after which he dedicated himself to writing. He is the author of The Kite Runner, A Thousand Splendid Suns, and other books. He has served as a Goodwill Ambassador for UNHCR, the UN Refugee Agency, since 2006.  In 2008, he launched The Khaled Hosseini Foundation, a 501(c)(3) nonprofit, which provides humanitarian assistance to the people of Afghanistan. He lives in CA.

Giles Croft (Director) was appointed artistic director of the Gate Theatre, London in 1985. In 1989 he joined The National Theatre as Literary Manager before becoming Artistic Director of the Palace Theatre, Watford and was then artistic director of Nottingham Playhouse. Giles has directed more than 60 productions and his most recent include The Kite Runner, Any Means Necessary, Tony’s Last Tape, Arcadia, The Glass Menagerie, and The Cherry Orchard. He is also a playwright; his work has been produced widely in the UK and Europe.

Barney George (Scenic and Costume Design) is a designer and maker for theater, live events, and creative spaces. He has designed sets and costumes for over 90 stage productions, ranging from regional and international touring to London’s West End. His creative journey began as a film and television prop maker in a family run business. Barney continues to enjoy collaborating with artists and makers from diverse disciplines, reflecting his own broad creative background. He lives and works in the UK.

Charles Balfour (Lighting Design) has been lighting shows for over 30 years and has established himself as one of Europe’s leading designers. He has worked regularly at the Royal Shakespeare Company, National Theatre and on London’s West End, most recently Get Up, Stand Up! The Bob Marley Musical for which he was nominated for a WhatsOnStage Award. Charles was last on Broadway lighting Jez Butterworth’s The River and The Events at NY Theatre Workshop in 2015.

Humaira Ghilzai (Cultural Advisor and Script Consultant) has been working with notable professional theatres and artists for the past 10 years. Credits include the world premieres, US and UK tours of the adaptations of Khaled Hosseini’s A Thousand Splendid Suns as well as The Kite Runner; Tony-winner J.T. Roger’s Blood and Gifts (La Jolla Playhouse); Kevin Artigue’s The Most Dangerous Highway in the World (Golden Thread); Gabriel Jason Dean’s Heartland (five theatres rolling world premiere); Slow Falling Birds(University of San Francisco); and Zealot (South Coast Repertory). Film credits: Merry Friggin Christmas and Whiskey Tango Foxtrot and short film, Away and Together. Humaira is a speaker, writer, and producer.

Ryan Bogner (Producer) is a producer and entrepreneur and a founder and Co-President of Content for Broadway & Beyond Theatricals. Notable productions include: The Woodsman, Here Lies Love, Doctor Zhivago and Cheers: Live on Stage among others. Upcoming: Cambodian Rock Band, The Kite Runner, The Cottage, A Very Brady Musical, Paradise Square, Where We Belong. Ryan holds a B.F.A. in Musical Theater and Directing from The Boston Conservatory, and an M.F.A. in Theater Management and Producing from Columbia University.

Tracey Stroock McFarland (Producer) is a seasoned theatrical executive and producer with over two decades of touring industry experience. A graduate of Hamilton College, she held senior positions at two major theatrical booking agencies before founding InHouse Booking in 2014 and is a founding partner and President of Booking at Broadway & Beyond Theatricals. Notable tours include Matthew Bourne’s Cinderella, An American in Paris, South Pacific, Legally Blonde, The Cher Show.   Upcoming Broadway productions: Paradise Square, The Kite Runner.

Martin Dodd, UK Productions. (Producer). Established in 1995 and responsible for over 200 productions nationally, internationally and in the West End. Producing credits include The Kite Runner, Legally Blonde – the Musical 42nd Street, Oklahoma!, Singin’ in the Rain, Disney’s Beauty and the Beast, South Pacific, Seven Brides for Seven Brothers, Jekyll & Hyde – the Musical, Carousel, Fiddler on the Roof, Murdered to Death, Anything Goes, The Pirates of Penzance, Barnum and numerous seasonal pantomimes. Ukproductions.co.uk.

Jayne Baron Sherman (Producer) is a Tony and Olivier Award winning producer. Broadway includes The Minutes, The Great Society, The Sound Inside, Network, American Son, Lifespan of a Fact, It Shoulda Been You, Side Show, Hedwig…, Of Mice and Men, Kinky Boots, The Normal Heart, 33 Variations, and A Raisin in the Sun (2004 revival). Off Broadway: Curvy Widow, Flea Bag (also West End). This is Our Youth (Sydney). Currently streaming: “The Accidental Wolf,” (Topic), A Call to Spy (Amazon, Apple), Radium Girls(Netflix), Tu Me Manques (HBO), Wild Nights with Emily (Hulu), Love is Strange (Amazon).

Daryl Roth (Executive Producer) holds the singular distinction of producing seven Pulitzer Prize-winning plays: Anna in the Tropics; August: Osage County; Clybourne Park; How I Learned to Drive; Proof; Edward Albee’s Three Tall Women; and Wit. The proud recipient of 12 Tony Awards, over 125 productions including Kinky Boots, six years on Broadwayand internationally; The Normal Heart; and Paula Vogel’s Indecent. Upcoming: Between the Lines. Trustee, Kennedy Center for the Performing Arts and Lincoln Center Theater.  Honored to have been inducted into the 2017 Theatre Hall of Fame. www.DarylRothProductions.com.