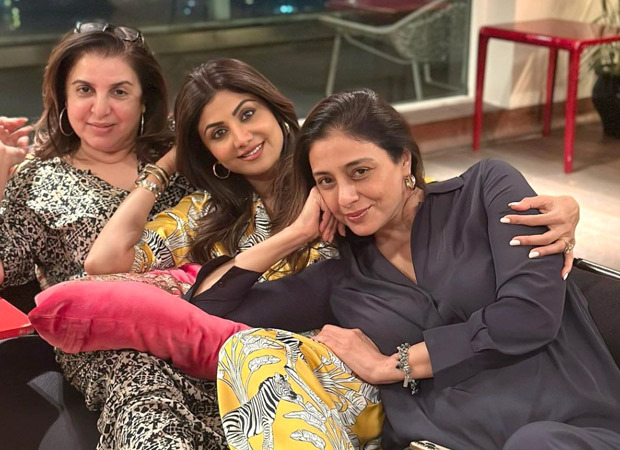 Bollywood actress Tabu turned a year older on November 4. While her fans and netizens flooded the internet with wishes for the actress, her friends from the industries planned a party for Tabu. Interestingly, actress Shilpa Shetty and choreographer-filmmaker Farah Khan Kunder hosted a birthday bash for Tabu, which turned into a pyjama party.

Taking to her verified social media handle, Farah Khan shared an image, featuring the trio, to give a peek into their gala time. The Bollywood divas kept things low-key as they posed for the camera supporting comfy pyjamas. They also held a quick cake-cutting ceremony and enjoyed a lavish lunch.

Sharing the photo, the Om Shanti Om director wrote a brief caption, which read, “Pyjama party.. celebrating @tabutiful s birthday dressed in formals.” Continuing further Farah pulled Shilpa’s leg reminding her of the promise to take them to Bastian, “thank u @theshilpashetty for promising us Bastian n landing up at mine.” Responding to the jibe, Shilpa added, “Promise will be kept so long as the after party is still at yours Farhooo.”

As soon as the director-choreographer shared the post on her social media handle, fans showered love on it. “3 darlings,” wrote a user while another commented, “power of woman unity.” A bunch of fans wrote birthday wishes for Tabu. Meanwhile, casting director Mukesh Chabra, and actresses Gauahar Khan and Shamita Shetty also reacted to the post with red-heart emoticons.

Coming to the birthday girl’s professional front, the 52-year-old actress was last seen in Kartik Aaryan and Kiara Advani starrer Bhool Bhulaiyaa 2. Tabu bagged praises for her performance in the Anees Bazmee directorial. Currently, she is gearing up for the sequel of Drishyam.

While all the lead actors will return in Drishyam 2, Akshaye Khanna will be introduced as a cop. The Ajay Devgn starrer is slated to release on November 18.