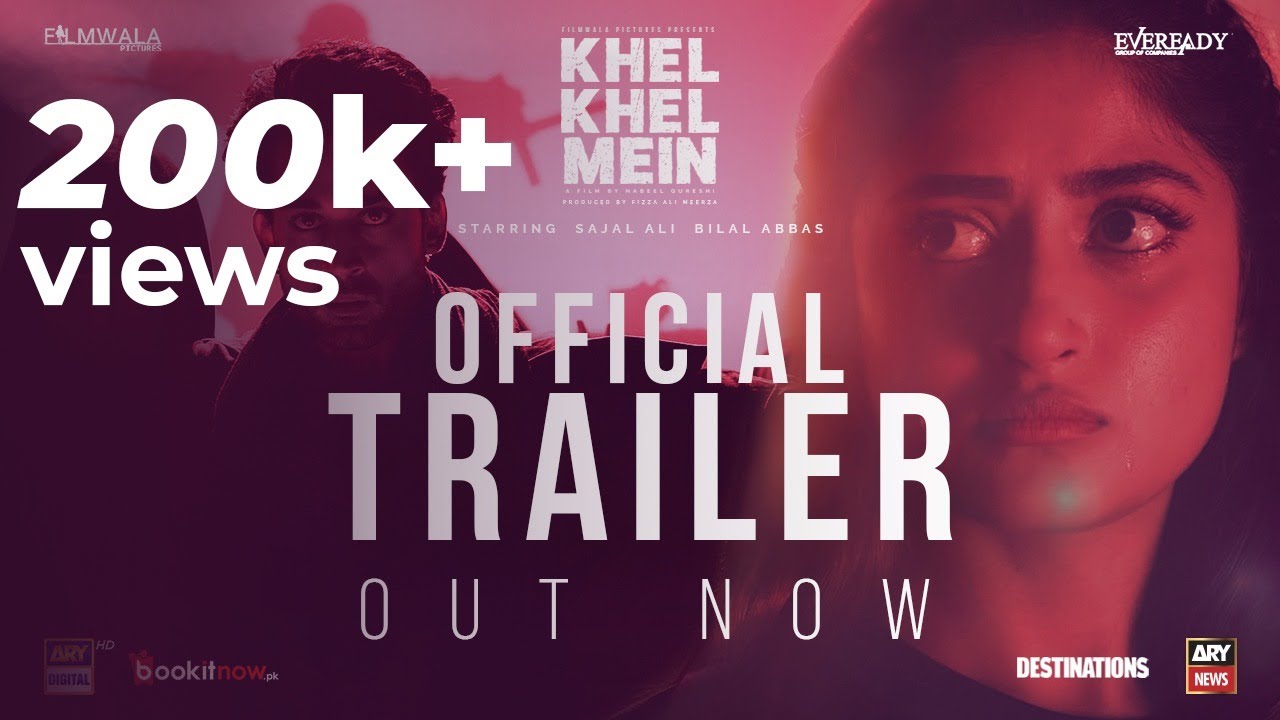 08th November 2021: The highly anticipated movie ‘Khel Khel Mein’ starring Sajal Aly and Bilal Abbas by Filmwala Pictures in media partnership with ARY Digital is the first Pakistani movie to be released nationwide in 2021 post-COVID, with a stellar cast and renowned director-producer duo, Nabeel Qureshi and Fizza Ali Meerza at the helm. While the movie is set to be released on 19th November 2021 in cinemas across the country, today marked the release of the movie’s trailer in a special launch event organized by Filmwala Pictures.

The trailer launch held at the Beach Luxury Hotel, Karachi and hosted by Zhalay Sarhadi saw all notables from the film, entertainment, and media industry in attendance, for a special screening of the movie trailer, followed by a Meet & Greet session with the cast, and a press conference for the media. Some noteworthy names among the guest list were Fahad Mustafa, Madeha Naqvi, Jerjees Seja, Saqib Malik, Nadeem Baig, Emraan Rajput, Ali Kureshi, and Ehteshamuddin.

The plot of Khel Khel Mein revolves around the air of mistrust after the fall of Dhaka. The film is a recap of the existing mindset and curiosity around the subject, which is interestingly knit into a journey of students exploring the history and making history by doing what is not obvious and expected. Instead following the path of mutual respect, love and peace for all. Khel Khel Mein features veteran actor Marina Khan, who is part of the cast, with Sajal Aly and Bilal Abbas as lead characters. The film also stars Sheheryar Munawar, while the cast also includes notable names such as Javed Sheikh, Manzar Sehbai, Nazar Hussain, Naveed Raza, Irfan Motiwala, Zehra Nawab, and Samina Ahmed.

“As a film maker and a producer, I did not wait to take my film to the cinemas. So I urge and expect our audiences to do the same. Do not wait to return back to the cinemas, just get there!” stated the Khel Khel Mein Producer Fizza Ali Meerza, the CEO of Filmwala Productions at the trailer launch. Fizza Ali Meerza is known for her stellar productions, namely Na Maloom Afraad (2014), Actor in Law (2016), Na Maloom Afraad 2 (2017), and Load Wedding (2018), and has also recently won the Best International Feature film at the Rajasthan International Film Festival.

“Khel Khel Mein is very different compared to all my other films. We shot it during the COVID times and it’s a product of a lot of thought, hard work, and love. I hope people will come watch the film with the same love we made it with”, commented Khel Khel Mein Director Nabeel Qureshi, who has several prestigious awards under his belt and is known as one of the founding pioneers of independent films in Pakistan.

Filmwala Pictures is Pakistan’s first independent production house to have gained a formidable reputation through its award-winning films, such as Na Maloom Afraad (2014), Actor in Law (2016), and Load Wedding (2018). By fusing entertainment with engaging social issues, Filmwala Pictures has not only generated positive dialogue within society but has also brought about social change by catalyzing the UN Women Pakistan began a campaign against Dowry in Pakistan.

‘Khel Khel Mein’ by Filmwala Pictures and presented by ARY Digital is set to release on November 19, 2021 across cinemas nationwide.

Watch the Khel Khel Mein Trailer at the link below: