Actor, writer, producer and director Ranganathan Madhavan has added a new feather to his. Today, on the 9th convocation ceremony of DY Patil Education Society, Kolhapur, the chancellor, the vice-chancellor, members of the academic council and the board of management came together to honour him. He has been conferred the degree of Doctor of Letters (D. Litt.) for his outstanding contribution to arts and cinema. 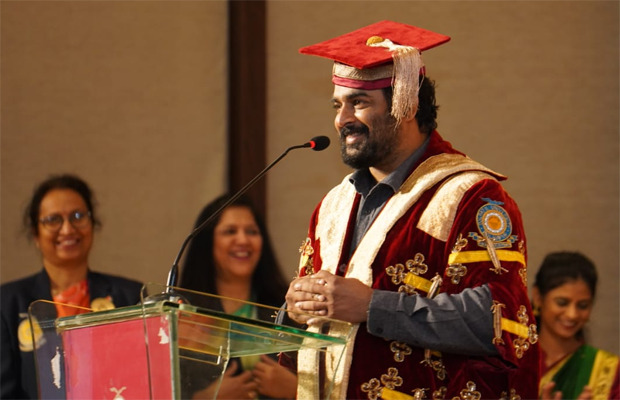 Talking about it, Madhavan says, “I am truly humbled by this honour. This will only motivate me to keep pushing the envelope and challenging myself with newer projects.”

In 2017, he appeared in Vikram Vedha, a genre-defining neo-noir thriller which proved to be blockbuster, garnering wide critical success too. In the recently released Maara, he was seen playing a mystical and gypsy soul who wins over everyone he meets with the largesse of his heart. He received raving reviews for his performance and the film went on to become a major hit.*

In 2018, he marked his foray into the web space with Breathe where he played a football coach who leaves no stone unturned to save his son who has been diagnosed with weak lungs.

Currently, Madhavan is awaiting the release of his directorial debut, Rocketry: The Nambi Effect which is based on the life of Nambi Narayanan, a former scientist and aerospace engineer of the Indian Space Research Organisation who was accused of espionage. He has also written, produced and acted in the project.